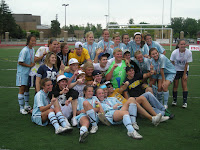 On June 13, 2009 my niece's soccer team (Portage Central Mustangs) finished their undefeated season with an overtime 3-2 victory against Utica Eisenhower to take the Michigan Division 1A State Soccer Championship. It was quite an amazing season and one of the first times a team had such a great (undefeated) record - ending up 27-0-2, ranked #5 in the nation.

During the final game, I was "Tweeting" updates from my cell phone when the girls scored. Prior to the game, I had set it up so that my Twitter account also passed updates along to my Facebook account. This meant that each update I sent out went to over 1,500 people, all part of my network of connections I've built up via my social networking efforts. 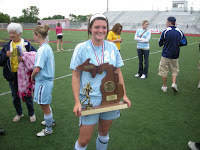 While posting my Twitter updates, I was obviously using the term "soccer" and "scores" in the text. Twitter allows people to search for keywords to help them find people of like interest to follow. Well, I ended up getting found (and followed) by some soccer-specific fellow Twitter users. The professional soccer team in San Diego (@SoccerGameBall), World Cup 2010 (@World_Cup2010) and even a professional soccer team from Australia (@nqfuryfc) were just a few of the new followers I "attracted" as a result of my my postings from the soccer field that afternoon.

I also received several positive comments from my friends on Facebook that were appreciative of the updates. One parent even posted they had kids at Portage Central that were unable to go to the game and liked the fact they were able to "be at" the game with my posts. I also used my new Flip video camera to take video during the game and was able to capture the winning goal, 39 seconds into overtime. Portage Central had a corner kick that went perfectly in front of the goal and one of the girls headed it into the net for the win. Amazing, and just like you see on ESPN highlights.
Winning Goal

Lessons Learned
As an Internet Consultant, I took away from this a few lessons that I'm going to be sharing with my clients. One, the world certainly is "flat" and the power of social media enables anyone to broadcast what they are doing and attract others of like interest. Recall when the plane crashed in the Hudson... it was someone on Twitter that broke the story first, not CNN or one of the major news networks.

Two, I didn't post updates to get other soccer fans to follow me, it just happened. However, if your business is doing something of interest and it DOES want to attract people, this is an excellent way to do it. What events, promotions or even unique products do you have that may be able to create its own "buzz" and attract folks that are searching for what you are talking about. Search still remains the #1 activity that people do on the Internet, but it's not just in Google any more. People are using the social networks (like Twitter) to search for topics of interest and get answers. Is your business putting the word out there to get noticed?

Finally, it takes a plan to do it successfully. I stated earlier that I was not intending to get followed by soccer fans during my Tweeting during the game. However, if I wanted to build a bigger following and increase the odds that I would attract people, I would have had a plan in place. I would have created a blog entry (or two) building up to the game to create interest and get more people to follow me before the game. This also would have set expectations on what I was going to be doing and create some excitement. As a business think about what sort of events and activities you are involved in and can you connect with your customers and community members letting them know what's happening. Will it guarantee you more business in the door? Hard to say, but one thing is for sure it will create interaction and keep you top of mind. In today's busy world, getting in front of your customers so they are thinking of YOU is never a bad thing!
Posted by Eric Cook at 9:24 AM