Is your bank ADAPTing to doing business on the Internet?

I don’t care how many times I step off the ferry and begin the walk up the hill to the Grand, there’s something magical about the Island for me. Maybe it’s the smell of fudge wafting through the air, the clip-clop of the horse drawn taxis or the fact that bikes are the primary mode of transportation on the Island. All I know is it’s good to “be back”, if only for a few days.

Normally we bring our mountain bikes to ride the trails, but we left them home this year. You may not realize it, but there are some of the best mountain bike trails in the state on the Island and I’ve been “over the bars” on more than one occasion as the terrain brought reality quickly into perspective (and my occasional slip in bike handling). However, this year was not the case and we knew we’d be too busy for riding. Maybe next year.

In addition to seeing good friends and the occasional Grand Pecan Ball at dessert, one of the things I particularly enjoy about the conference is the keynote presentations. We’ve had some great ones over the years, and this year was no exception – former Major League pitcher for the Yankees (and others) Jim Abbott. For those of you who many not recall, Jim was the pitcher who was born without a right hand, throwing and catching with his left hand alone. After graduating from high school in Flint, he went on to the University of Michigan and pitched in college, as well as on the U.S. Olympic team, winning a Gold Medal in 1988 in a 5-3 victory over Japan – the first ever for the U.S. in baseball! Check out his full bio here, quite an amazing guy.

The soft-spoken and humble Abbott handed out baseball cards to all attendees with a picture of him in his Yankees uniform on the front. But, instead of the standard stats you’d expect to find on the back from his successful career as a professional pitcher, he had the word ADAPT, which was the basis for his talk that morning. Each letter stood for a word that he felt was key to his success and ability to overcome adversity and I wanted to share some thoughts on how I think this word can be applied to doing business on the Internet, especially as it relates to community banks. However, this just as easily could be any business as the message is pretty universal.

A – Adjustability
The way businesses is being done online today with the advent of “web 2.0” sites like Facebook, Twitter and the growing popularity of blogs requires that businesses be open to making changes to the way they have normally done things in the past. Just as Jim had to learn to throw (and catch) with the same hand, community banks that have not traditionally been comfortable using their website or Internet efforts for anything more than an online brochure or customer access to online banking are now in a position of trying to figure out “what more” can be done (and how to do it) online. Being able to adjust your strategy “on the fly” is of critical importance as things are changing rapidly in today’s busy pace of business and it’s the quick and nimble organizations that will continue to be successful and survive.

D – Determination
As Jim said during his talk, “once you find your purpose and decide what you want to do, don’t let anything stand in your way”. He decided he was going to be a pitcher and did just that, but it took a lot of hard work and ignoring those that said he couldn’t do it. In your bank, who’s saying you cannot use the Internet more effectively? Is compliance telling you it cannot be done? Do you have some “old school” bank mentality standing in the way? Whatever the case may be, once you have decided that you want to embrace what’s possible on the Internet and use it as a strategic tool for building relationships and getting more out of it, I say go for it and don’t let anyone stand it your way. Granted, as bankers we have rules and regulations to abide by that makes us a bit different than the standard business, but where there’s a will, there’s a way.

A – Accountability
I see it all too often. When asking the question “Is your website working for you” many banks give me the “deer in headlights” stare back and then say something like “what do you mean”? I think this is because to many the web is still seen as a venue that cannot be measured and held accountable for its actions – yet it’s probably easier to do this on the Internet than any other business activity. By using analytics and tracking code, you can quickly see what pages on your site are getting the most visits, which keywords are being used to find you online (and which ones are missing) and if you do e-mail marketing you can even uncover the people that click on links and offers in your messages, making it easy to provide those that are genuinely interested in knowing more about your bank the information they are looking for. The Internet is no longer the place where businesses should expect to do business and spend money “just because”. The tools are online to know if it’s working, and if not, you can quickly develop a plan to turn it around.

P – Perseverance
Will your new-found interest in getting more out of the Internet for your bank result in new customers and increasing profits over night? Probably not. In fact, it likely will take several months of effort without seeing anything noticeable happen before you start seeing results. But, if you are following a plan that has been created based on sound business principles, you must push through the temptation to quit after a few months and have faith the process will work. While I wasn’t there, I’m sure the first time Jim tried catching and throwing with the same hand it didn’t go so well. It likely took time – months and even years to refine the process – yet he never gave up and believed in himself that it would work. It’s that same commitment you need to have with a focus on the end goal to be a success.

T – Trust
The last letter is Jim’s admitted favorite in the ADAPT process and “Trust” represents the faith you must place in yourself, the belief you can do it and that you can respond to any circumstance that is thrown your way. As it relates to the evolution of your bank embracing the Internet, starting a CEO blog, posting on your own Twitter page or using YouTube to promote customer testimonials for your bank, the fact that others around you may not be doing this now should not discourage you from moving forward. If you’re bank is committed to stepping outside of the box and embracing “web 2.0” tools to build relationships online, you need to have faith in the process and believe in yourself.

While conference attendance appeared to be down quite a bit from year’s past, I was still quite pleased with the conference overall. With the challenges in the economy, it’s no surprise that many bankers and vendors decided to pass on this year’s event. However, I pleased to say that I came away meeting some new people and look forward to getting to know these new friends throughout the remainder of 2009. Of course, it was also great to see many “old friends” as well and the conference just reminds me of how lucky I am to be part of such a great industry. 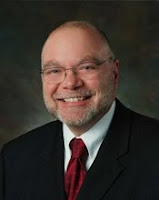 Community bankers have been taking it on the chin in the recent months, but I can tell you as a whole it’s a great industry to be in. They do a lot of good for their communities and, while I’m sure it was “off the cuff”, the 2009 Michigan Banker of the Year, Craig Goodlock from Farmers State Bank, showed his humility (and in my opinion, all the more reason that he was the right pick for the award) when he spoke about the importance of all bankers playing a positive role in their communities. I captured his speech on video and will be presenting it to him later this week. Maybe he’ll decide to share it on his blog…

So, what are you doing to ADAPT to the changes that are facing you in today’s challenging times? Maybe you’re not ready to embrace the Internet and “web 2.0” social networking strategies. But, I’m willing to bet that your business is different today than it was a year ago. Hopefully some of Jim’s ADAPT strategy can come to play in your organization and bring you even more success for the remainder of 2009 and beyond. I know it will for me. Thanks for sharing, Jim...