I had intended on getting this posted before now, but as soon as I got home Monday, it was go, go, go and we have been on the road and unable to get my recap. The good news is that last Sunday I successfully completed my first half "Iron Man" event down at Cedar Point in Ohio. I say "Iron Man" in quotes because it wasn't a sanctioned "Iron Man" event (so I'm not sure I'm even allowed to call it that) but it was a 1.2 mile swim, 56k bike and 13.1 mile run and that's what people think of, so I'm going with it (that all adds up to 70.3 miles, thus the name of this post). The promoter, Rev3, did a great job and it was a super event. Anyone interested in getting into this type of distance should consider making this their first one since you also get to ride roller coasters before and after and if you bring family, it gives them something to do while you are out on the course punishing yourself. 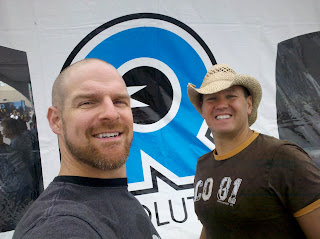 Shayne and me at check-in. 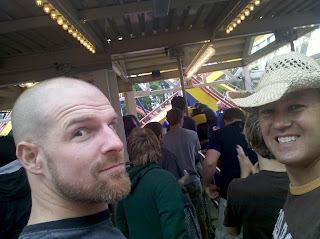 A little Roller Coaster action before race day. It's good to be a kid! 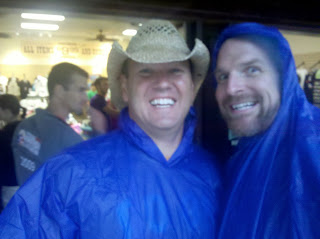 Who's the psycho on the right! Nice ponchos, eh?
The day before the race we got nasty rain and the waves on Lake Erie were 3-4 feet, so that was going to make for a very interesting swim some Sunday morning if things didn't calm down. Fortunately, the weather turned and we had mid 60s for the swim start and the water was relatively calm with just some gentle rollers. The swim went well and I came out mid-pack (raced Clydesdale and there were 48 of us "big guys" in the Half). I think I was 20th out of the water and then 18th out of the transition. Must be some of the guys decided to sit down and grab a bite to eat (you know, we are Clydesdales after all). 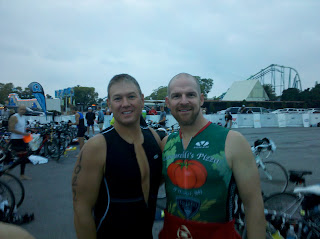 Shayne and me before the start of our first 70.3.
On the bike I did well and my split times showed that I made up a significant amount of time. I think my place got as high as 5th or 6th on the bike and only got passed a handful of times, which was cool. However, I had a feeling that several of these people I passed would be waiting for their revenge on the run... and I was right (yeah, gotta still work on my run). I did lots of comments on the "Eat My Nuts" and jersey and one guy even passed me and simply said "I'd prefer not, they are probably too salty". LOL In fact, after the event was over I was approached by several people (because I had a big tomato on my jersey, making me easy to spot I guess) saying "dude, you're the 'eat my nuts guy' - I love it man!". I made sure to suggest that everyone interested in my "nuts" make the trip to Homer, MI and visit Cascarelli's and they could taste 'em for themselves. Ryan's nuts are amazing.... (grin)

Ok, back with the play by play. Coming in from the bike I headed out on the run and actually felt better after the 56 miles than I did in Ludington on the Olympic distance event a few weeks ago. Strange, I know, but I didn't have any of the cramping I had at the start of my Olympic run and for the first several miles I felt great, so that was good, and I headed off into Sandusky to wind through the streets on the 13.1 mile run course. There were lots of spectators and an aid station at every mile with very friendly folks to help us along. The numbers had our names on them, so I heard a lot of "keep it up Eric" and "way to go Eric", so that was cool, even though I had no idea who these people were. At about mile 9 or 10 I started feeling it in my legs on the verge of seizing up at times and had to really monitor my pace to keep just below "crap stage". Now I was starting to feel it and the remaining few miles were not going to be as easy as the first few, that was certain.

However, I had initially set my sights on beating 6 hours for the event and could tell when I started my run that if I paced in the low 10 minute mile rage I would easily be able to come in under that goal. So every mile I kept checking my watch to see where I was in relation that plan. 10 minutes, 20 minutes, 30 minutes, etc... and how far under each of these times I was. I had a buffer of about 4 minutes at one time, so I knew that I could slow it down at the end to keep the craps away (and ensure that I also run the entire time and NOT walk).

Coming into the finish chute was such an amazing feeling. I've done 12 hour, 24 hour and 100 mile races before, but the crowd, jumbotron video screen with my picture on it and just raw energy of finishing in Cedar Point was something I'll never forget. It felt pretty cool to come across the line and feel like I met all of my objectives and could still walk! Under 6 hours... check (5:52:12). Ran the entire time.... check. 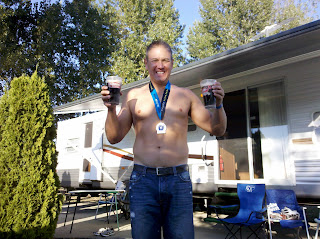 Celebrating after the race. Shayne is such a good buddy. The pint glasses were chilling in the freezer and I don't think I've had a better Guinness. Thanks buddy (and nice medal)! 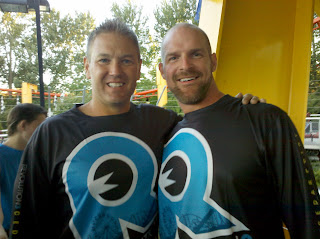 Back to the park with our Finisher's jerseys. Two rides on the Top Fuel Dragster and we called it a day.
In the end I finished 12th out of 48 in the Clydesdale category and 225 out of roughly 700 total half participants. I'm an official "70.3" finisher now, which is pretty cool. However, I had some "disillusions of grandeur" at the beginning of the swim to try a full next year.... These were quickly crushed around mile 9-10 on the run when I said "I can't wait until 13.1 is over". The run was set up so that you had to turn around and go back out to run the 13.1 again to complete the full and I cannot even imagine doing that the way I felt. So hats off to those of you reading this that have completed a full. Stud!

Shayne, my buddy that also did the race with me, and I are thinking about doing the half in Madison next year, so we'll see how that goes. We both had a blast and it was cool to spend time with him. Plus, I was able to raise $875 in donations to support the Children's Neuroblastoma Cancer Foundation (you can still donate), which was the cancer that took Shayne's daughter, Christi, at the all to young age of 9. I thought about her quite a bit while I was out there running (you have a lot of time to think about things when you are out there that long). The special part of all this was that Cedar Point was one of her favorite places to go and I can still remember riding the rides with her that nobody else wanted to go on. Man, I miss that little girl...

Way to go man. You have me whooped. I could never do the run (or at least I certainly do not want to).

Great blog. Look forward to riding with you soon.

Thanks Mike. I think I'm addicted to the tri thing and love the event. I do need to get out on the mountain bike this year at some point, but the multi-sport challenge is pretty cool. Looking forward to riding with you soon too... Eric