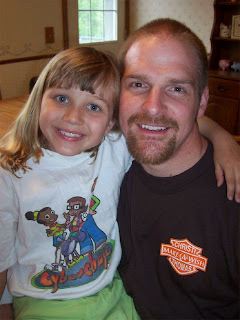 Since 2006 I have been picking a "longer than normal" athletic event to use as a personal fundraiser to generate money for the Children's Neuroblastloma Cancer Foundation in honor of (now in memory of) Christi Thomas. She fought this deadly disease for four years and over the course of her battle touched the lives of many, including mine.

If you've already heard the story and want to "cut to the chase", hop on over to my donations page and make a contribution. I would love to have your support in this year's event - a Half-Ironman distance triathlon at Cedar Point on September 12, 2010. This just happens to be the day after Christi was diagnosed back in 2002 and September is National Childhood Cancer Awareness Month. Fitting circumstances for my longest triathlon event ever.

If you're not familiar with the story, I met Christi's father, Shayne, at the Graduate School of Banking at the University of Wisconsin, Madison in 2001. Shayne and I were bankers at the time and lived on the same floor for the two-week session. Both fitness enthusiasts, we got up in the mornings and ran the trails around Madison and developed a friendship that lasts today.

After our second year of GSB, Shayne returned home only to find that on September 11th his five-year old daughter was diagnosed with stage IV Neuroblastoma, a rare (and deadly) form of cancer. While he didn't make it back the following year to graduate with me, he did return the following year to graduate and Alicia and I went back to Madison to watch him complete the GSB program and then spent some time at the Dells with the entire Thomas Team.

Over Christ's four-year journey I built a website for the family (www.ChristiThomas.com) that has hundreds of pictures from her journey as well as helped to develop a blog (www.ChristiThomas.Blogspot.com) as well as a site for her foundation (www.ChristiThomas.org) that provides scholarships for children in Christi's area. When you have a chance, spend some time on these sites - they will change your perspective on life and what's really important. 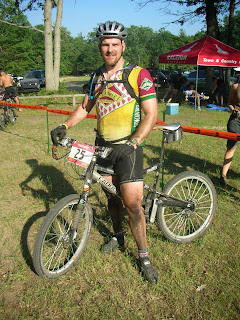 I started my fundraising in 2006 when I competed in Michigan's only 100 mile mountain bike race, the Lumberjack 100. Held in the Manistee National Forest in Northern Michigan, this course challenged my physical abilities and was honored to receive the support of over 160 donors and raised in excess of $12,000 my first year. I competed in the LJ100 two more times and then decided to find a new challenge, which is what brought me to triathlons.

Last year Shayne and I committed to racing an Olympic distance triathlon and loved it. While funds raised didn't come close to my first year of $12,000, I was able to raise more money for the CNCF and continue the tradition of challenging myself and raising money for a worthy cause. Plus, it's my way of keeping Christi alive and her spirit with me while I'm out there pushing myself to finish the race.

So, this year I'm competing in a half-Ironman distance event which consists of 1.2 miles of swimming followed by 56 miles on the bike and finally a 13.1 half-marathon to bring it all home. This is the longest triathlon event I've ever attempted, and while I'm hopefully going to be done well before the time it took me to ride my mountain bike 100 miles, the challenge is the same... finish the race and raise money to fight childhood cancer in celebration of one little girl... Christi Thomas.

There's a lot more to the story (as I'm sure you can imagine), but hopefully you've been convinced this is something that's worth your financial support. Please spread the word, tell family and friends, post it on Facebook and help me get my message in front of as many people as possible. I'm eager to get out there on the 12th and compete and you can even follow my training online with Endomondo, a great site that tracks my training and makes it possible for me to share my route and distance online. If we're friends on Facebook, chances are you've seen some of my updates.

So in conclusion, thanks for your consideration and hopeful support. Together, let's make childhood cancer a thing of the past!
-Eric

P.S. The CNCF is a fully-accredited non-profit so your donation is tax deductible and you can donate online with a credit or debit card. A receipt will be e-mailed to you for tax purposes and will include the CNCF's tax ID number.
Posted by Eric Cook at 6:59 AM

Good luck to you both! I will be thinking of you!

Thanks Olivia. I appreciate your support! Eric