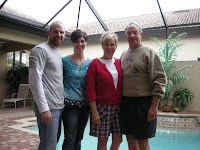 Been a bit since my last post, but we've had a busy couple of week. At the end of January, Alicia and I headed to Florida to visit my parents in Estero and enjoyed some great weather. I was able to get quite a bit of work done from down there, actually, and am really enjoying the "Internet" lifestyle. But, it was good to get away for a bit and got to play tennis a couple of days with my dad and a few of his buddies. Alicia and I also got in a couple of nice workouts at the fitness center and even swam some laps in the pool. 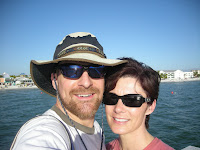 We did manage to take one day "totally off" (surprise) and headed to Fort Myers Beach and walked a couple of miles on the beach and got some great photos. We've been down to visit my parents three times now and this was the first time we made it to the beach. It was a lot closer than we thought and it's great to discover new things. 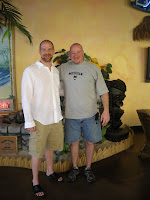 Probably one of the coolest things that happened while we were down there was Alicia and I both connected with past classmates we had not seen for a long time via our Facebook accounts. Alicia was able to see a high school buddy that she had not seen in 25 years and a few days later we met one of my fraternity brothers and his wife at the same coffee place (and had not seen him since graduation - 20 years ago!). Facebook is an amazing way to "re-connect" with friends from the past and if you're not using it yet, you really should...

Unfortunately, my parent's computer decided to die on us while down there and we had just installed Skype and got their webcam set up (their Christmas present from us this year). New hard drive is on the way and hopefully they'll be back up and running soon. Before the hard drive crashed, we were able to get in a couple of Skype calls with Alicia's parents at Houghton Lake (so we could see the "kids") and that was nice. The amazing part was the fact that Ryder was watching me over the camera on their laptop screen and I gave him one of my hand commands that "tells" him to speak, and IT WORKED! That's right, all the way from Florida I was able to "communicate" with Ryder via webcam. Amazing... I've uploaded some more pictures of our trip to my Facebook page, so stop over and check 'em out. 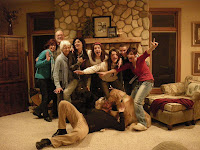 We were home for a week (and back to the snow) and this weekend had Alicia's family over for birthdays. Seems that just about everyone in the family has a birthday in either February or December, so the entire "Honke clan" was over for the weekend. I uploaded a bunch of pictures to my Facebook account and it was great to see everyone. The pooches are toast and as I type it's only 9:30 and Ally's been upstairs in bed for almost an hour waiting for us to call it a night. They have a blast when everyone is over and love playing with their cousin, Dorry. In fact, they'll be spending a few more days this week as Alicia and I head to Chicago for a couple of appointments and to "officially" celebrate her birthday (29 and "holding").

Professionally speaking, I've got lots of cool work "stuff" going on and landed a big project the other day. Also booked a few banking conferences to get out and about and meet more bankers and continue spreading the gospel of Internet marketing in the community bank sector. I've also been approached by fellow consultants on prospective bank projects in Iowa and Belgium (talk about different market areas). While in Florida we launched the site for BC Connected and have another project that's likely going to launch this week. I also held a webinar on "data leakage prevention" (aka DLP) and introduced a new concept on file-level encryption to a few bankers. I'm excited about building up my partnerships with vendors that can help add value to my banking clients, and am already planning another webinar for March on another great service for my banking "buddies".