What a Wonderful New Year! 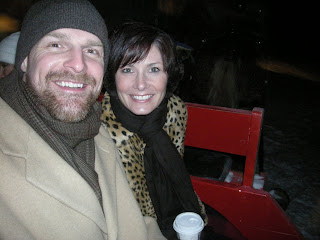 This year for New Year's I decided to surprise Alicia and do something special and we headed north to the Garland Resort in Lewiston, MI for some cross country skiing, a horse-drawn sleigh ride to a gourmet dinner and then dancing and fireworks to ring in the new year. I kept the evening a surprise and the only thing Alicia really knew was that we were going to do some skiing, but beyond that she was clueless (ha ha ha). Despite being married for 11 1/2 (wonderful) years, this was the first time we really went out to "celebrate" the arrival of the new year (aside from going to friend's houses or having friends over). 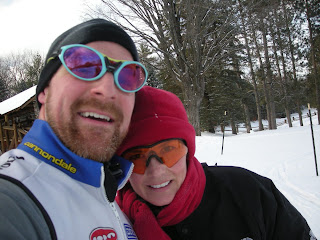 We got some fresh snow the night before, so the ski trails were in pretty good shape. We were out for about an hour and the trails winded through the woods and some of the picturesque cabins that line the golf course (but you had to use your imagination to "see" the green fairways this time of the year). Alicia and I are not "golfers" (despite the fact that I was on the winning team at our WSI E&I golf outing this past September in Vegas), but we had been to Garland before, several years ago when they used to host the Garland Hammer - a great mountain bike race with a huge pasta feast afterwards. 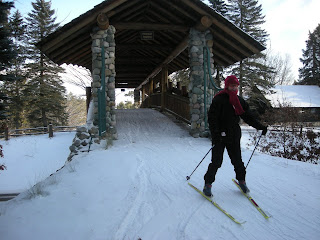 After the ski, we returned to the room to relax a bit and enjoy the hot tub to warm up before heading out for our sleigh ride to dinner. I decided to "come clean" and during our hot tub told Alicia about what was in store for the evening. She "claims" that she had a feeling it would be something like this, but was still surprised (and I think I scored some points in the process)! 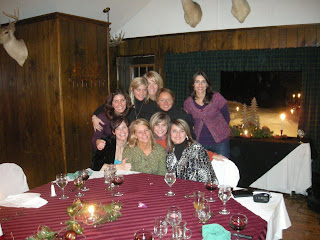 We headed down to the pickup area for the sleigh ride to dinner and met up with the rest of the group that had reservations for the dinner event. We met a nice couple from the Irish Hills area that were up celebrating and learned they are getting married later this summer. There was also a big group of folks from the West Branch area that made the evening such a great time. We all hopped on the sleigh (after an "adult" hot chocolate to get some warmth in our toes) and sang 80s songs the entire way. It was obvious that our evening was going to be a fun time. 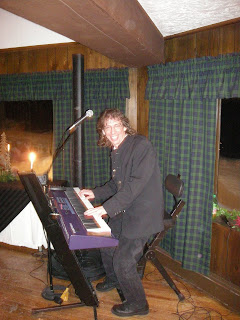 After our 20 minute "open sleigh" ride, we were dropped off at our dinner cabin, where we were met with a roaring fire and a table set for 18. The dinner was amazing and included great wine, duck, pheasant, venison, lobster and cheesecake for dessert. Bradley led us in song the entire evening from the helm of his keyboard and kept the night moving along. Ok, I'm not much of a singer, but you get a few drinks in me and watch out. While we were at dinner for almost two hours, it flew by and everyone had a blast. The running joke was when one of the other ladies made a comment about how beautiful Alicia is, which was a very nice compliment (and, of course, I COMPLETELY agree). 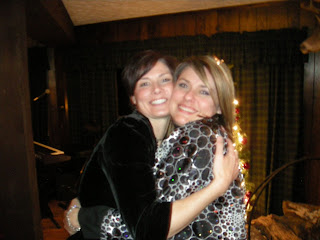 Of course, a room full of "spirited" guys just couldn't leave that comment alone and you can imagine the fun we had with that one! I want to thank all our "new friends" for helping to make the dinner (and the rest of the evening) such a great time, especially Matt Arbour (of Dean Arbour Ford) for taking the time to introduce us all to the rest of the "crew" and making us feel welcome. While I had planned this evening to be a surprise for Alicia, I too was surprised that we had so many fun people to enjoy dinner with. I gave out a few of my cards for folks to send me an e-mail (which I hope they do) and am planning on sharing more pictures from the evening with them all. 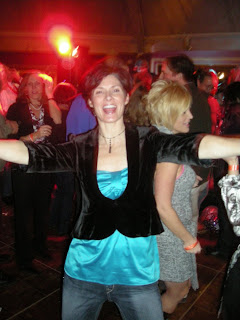 After dinner we headed back to the resort where the New Year's party had already started with live entertainment, dancing, (more) drinks, a huge bonfire and fireworks at midnight. Alicia and I "cut it up" on the dance floor - typically something we only get to do when we are invited to a wedding (LOL). The live entertainment sounded really good and when 2009 arrived we watched the fireworks show and had the traditional New Year's kiss (and it was a pretty good one too!). Even after all these years, I still get goosebumps and am convinced Alicia just keeps getting more beautiful as the years pass. Yeah, I'm pretty lucky! 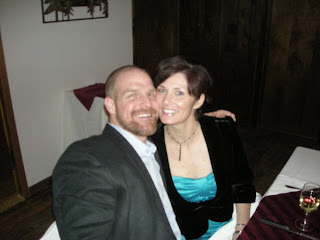 So in closing, here's hoping that your New Year's Eve was filled with as much fun and joy as ours was. As we look back on 2008, both Alicia and I so very thankful for the friendships we've made over the past year (and the ones that we've had for many more). Looking forward, we're both excited about what 2009 has in store for us. We've already got plans to visit my parents in Florida at the end of this month, hopefully will be picked as a speaker for WSI's next E&I conference in the UK, hopefully will book a cruise (I hear there are some amazing deals out there) and a few other nice trips planned.

Of course what New Year would be complete without a few resolutions. Well, one of mine is to spend more time doing things like this with Alicia and enjoying more time together. We're also going to do a better job of taking pictures do help "document" all the fun that we're going to have in 2009 together and with our friends and family. So hello 2009, I'm excited that you're here and am looking forward to the ride!

P.S. See more pictures on my Facebook page. If you haven't joined Facebook yet, what are you waiting for? It's a great way to stay connected!
Posted by Eric Cook at 3:09 PM