Greetings everyone. Yes, I know it's been way too long between updates and you all can shoot me later. However, there are some good reasons (well, at least I think they are good reasons) for the lack of updating.

Job Change Coming Soon...
Yup, you heard it. As you can see, the "Biking Banker" title has been changed to the "Binary Biker", so those detectives in the crowd will quickly decipher that something to do with computers is on the horizon for me. I've announced that I'll be stepping down from Monarch Community Bank at the end of July to pursue my passion of working on (and with) the Internet and assisting businesses with this brave new world. Stay tuned, more to follow on this exciting change... but as you can imagine that's been somewhat consuming my life as I prepare for this big leap of faith. 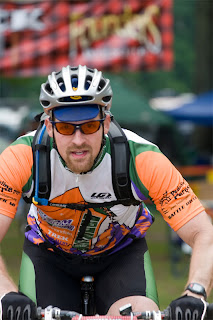 Lumberjack 100 2007
Good news is that I again finished Michigan's only 100-mile mountain bike race and was able to shave about 50 minutes from my time last year. I came across the finish line in 10 hours and 37 minutes (last year was 11 hours 22 minutes). But the best part of the race is that I was able to raise over (once all the lingering donations come in) $7,000 for the Children's Neuroblastoma Cancer Foundation. While my efforts unfortunately will never bring Christi back, they will continue in her memory and will serve as a lasting tribute to her inspiration and life-altering impact she had on me and countless others from across the globe.

The Drive Up
Alicia, the kids and I headed north on Friday morning to Houghton Lake where they would hang out for the weekend while I ventured over to the LJ100 for 10+ hours of "fun". Alicia headed over last year and it wasn't much of a spectator event, seeing me once every 2 1/2 hours or so. It was going to be hot, buggy and dusty so she decided to hang at the lake and enjoy the water. Can you blame her?

On the way over, we got just a little (very little) rain and I knew it was going to be hot when the pavement steamed to the point that it was like fog raising off the ground. I actually had to slow down in some spots it got so dense. It had been a hot few days and last year was in the upper 90s with high humidity. I was hoping this year would be a bit cooler, but it was looking like another hot one and I hadn't even made it to the course yet. Oh goodie.

Upon arrival I got my packet, hooked up with the "Shuttle" and the rest of the Alma crew and saw Dan, one of my fellow Team Active Racing riders. There would be two more to join us for the race (Daryn and Kathy) and all ended up doing well race day.

Lap #1
The day started out cooler than expected (yae) and the race immediately started out up one of the nasty hills that we would get to ride four times before the day is over. I say "ride" when actually I mean "walk up" since it was tore up pretty good I was in the middle of the pack and there just wasn't room to ride it. Oh well, there were several other areas on the course where I got to "hike and bike", which was ok. This gave my feet a break and helped keep away the dreaded "hot spots". All was going well until I was about 5 miles from the completion of the first 25 mile loop and ended up hooking a bar end on a tree and came to a very quick stop. This wrenched my handlebars and bent down my right brake lever, which required some fixing at the pit area before lap #2. However, the worst part about this was I heard some "stuff" going on in my left shoulder as I fought to keep from going over the handlebars (and get run over by the four guys that were riding behind me). Fortunately a little Advil is making it feel all better. Lap #1 time: 2:18

Lap #2
After fixing my brake lever and getting some more liquids (and a banana), I was back off on the course. This time I managed to keep away from trees that jumped in front of you and grabbed your bars (grin), but washed out on one of the 90-degree turns in some sand and went down pretty hard on my left knee. I felt that pedaling for the next couple of miles, but eventually the pain in the other areas of my body took over and I forgot all about it. Last year at the end of this lap is when the cramps set in, but I followed a more disciplined nutrition and hydration plan this year and was feeling much better. Aside from the crash around the corner, this lap was pretty uneventful. But this is only half way and I still have another 50 miles to go. Lap #2 time: 4:57 (2:39)

Lap #3
I remember from last year a buddy of mine saying that the third lap will be your worst, they always are in events like this. Just over half way done, but you know in the back of your mind that you have yet another 25-mile lap to go after this one is done. As with the prior two laps, I stopped at the aid station at the midway mark and fueled up with some liquids. However, at this time I started feeling "not so good" and should have listened to my body. But, my urge to remain hydrated with something other than water overtook my common sense and I was fueling up with energy drinks to keep the electrolytes balanced and the craps at bay. This was when I saw Kathy. She stopped for a brief second and then continued while I drank. She said "you'll catch me" and took off... Aah, if that could have been the case. Continuing off on the rest of the third lap I waddled around the lap like a bloated goat, realizing that I had over compensated for my urge to remain hydrated and likely should have stopped drinking. So, I endured on, but the good news is that I didn't crash, just felt like crap. Lap #3 time: 7:54 (2:57) 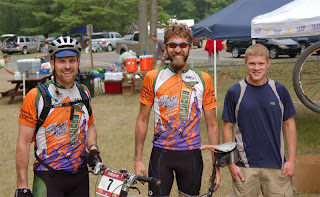 Lap #4
Here it is... the final lap. At the end of each loop there is a section about 1/4 mile away where you catch a glimpse of the parking lot and know you are home free. I was thinking about that view the entire way around this lap. Good news is this lap was going to be the last one around and I'll get to see the parking lot for the last time. Over the day the temps had remained cooler than last year, which was great. But I could use a little cooling down... A running joke I had with the Thomas Team (Christi's family) was that she was going to be my guardian angel and I expected her to push me up the hills when I got tired. Well, that wasn't working, so I figured she was thinking of another way to help. So (out loud) I said "c'mon Christi, how about some rain to cool 'Mr. Cook' off a bit?" Literally seconds later I felt my first rain drop and it sprinkled for about five minutes. That felt pretty good. Another 15 or so miles later (after I made the bold decision to ride past the aid station and not bloat myself again) I asked her for another sprinkle and it rained a second time. Pretty cool. After checking out my lap times, it was evident that I was able to get some of my strength back on this fourth and final lap. It was good to see the parking lot, but even better coming across the finishing line and knowing I was done. Lap #4 time: 10:37 (2:43) 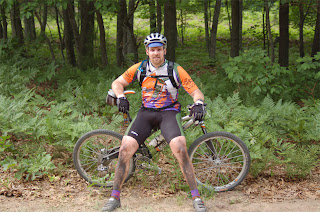 Next Year?
In the immortal words of California's Governator... "I'll be back". I take great pride in being personally responsible for over $19,000 in donations collected for the CNCF and want to thank everyone that has supported me over the past two years. I'm working to get my Pedaling with a Purpose concept expanded to other cyclists and hope to be a catalyst for others to raise money for causes they are passionate about and make a difference. 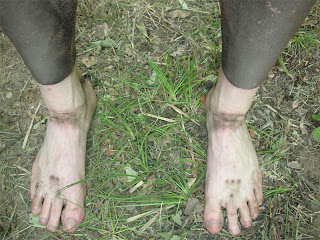 P.S. Yes, it was just a "little bit" dusty out there on the trail. No, I'm not wearing tights, this is the sockline before a much-needed washdown after the race!
Posted by The Binary Biker at 9:00 PM