Plans are moving along nicely with Team Active Racing and it looks like we'll have close to 20 riders for the 2007 season participating in mountain, road, tri and some endurance events (that would be my "gig"). It looks like next week we'll have the crew over to the house for a contract signing party and give all the racers an opportunity to get to know each other. Should be a good time and Alicia's using it as an excuse to head out and get some shopping done. Gee, I can't see why she doesn't want to stick around and deal with all the testosterone... go figure. 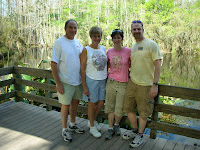 Training has been going well and I've been pretty diligent about my weight lifting and riding throughout the week. Alicia and I have been getting up early MWF and it's been great for us to do this together. Nice to have a partner to help motivate each other. We spent some time with my parents in Florida a few weeks back and was able to get in some great runs and even got to pick up the racket and play some tennis with my dad (kudos to my father, he beat me in two sets but to my credit I took him to duce most every game and hadn't picked up a racket in 2 1/2 years... that's my excuse and I'm sticking to it!). Since I'm hoping to do the XTERRA Off-Road Duathlon at Fort Custer on May 20th, getting some "non-bike" activity in was a good thing and I'll try to sneak in a trail run this weekend.

Time to put in some "web work" for a bit and then plan on heading out for a ride this afternoon with Danny. There's still some snow on the ground but I'll get out my cross bike and should be just fine (man, I love that bike).
Posted by The Binary Biker at 9:23 AM