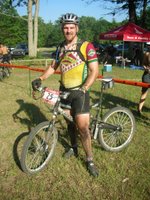 11 hours. 22 minutes. 32 seconds. That was my finishing time for the 2006 Founder’s Lumberjack 100 mountain bike race. Yes, I completed my objective in finishing under the 12-hour time limit, which was quite an accomplishment considering only 63 out of the 175 registered racers finished the full 100 mile event. The day was very hot, the course was sandy in all the “right” places (ha ha) and dehydration and heat exhaustion took its toll on many of the day’s participants.

However, as I approached the starting line on race day (for a 7:00 am start), I knew that I had more than just my personal goal of finishing the race pushing me to stay under 12-hours. I had over $11,000 in donations for CNCF from supporters all over the country behind me, so not completing the race just wasn’t an option. Check out my donations page for a complete listing of folks that contributed to my race.

The first of four 25-mile laps was “easy” (meaning my legs had not started to cramp and I was not in pain when I finished) and came in at 2 hours and 21 minutes. I took a quick break to re-fill my water bottle and Camelbak, gobbled down some Power Gels for a quick boost and then headed back out on the course. At the mid-way aid station at the 12-mile mark my buddy Randy met up with me and we ended up riding together for most of the remainder of the race.

Towards the end of the second lap I could tell that I was going to have to be sure to keep hydrated because the temperature was starting rise. My time after 50 miles was just over 5 hours, which kept me on pace for my sub-12 hour goal. Randy and I still were riding together and both of us started experiencing “hot spots” on our feet and took opportunities to walk our bikes up some of the steep sections to give our feet a break. This really helped and we could pedal on for several more miles before they came back.

A good buddy of ours, Dave (aka “Doner”) who competes in the Michigan Endurance Series warned us that the third lap would be the worst. He said you’re going to be tired, know that you still will have another 25 miles to go (which will be hanging over your head while you ride) and if you are not hydrated enough this is where you’ll likely “blow up”, so be careful. Guess what… he was right. My legs started cramping a little towards the end of the second lap, but now they were seizing up on a regular basis. When I raced in the National 24-hour Challenge several years back, a fellow racer told me about Rolaids and how the calcium helps to get rid of cramps. Knowing this, I had a bottle of Rolaids in my bag and filled a zip-lock baggie that I kept in my jersey pocket. During our “feet breaks” I would pull out the baggie and throw down a handful of them to make my legs feel better, which they did. Randy did a great job of keeping me going and we motivated each other along the way to keep on a pedaling.

Also of interest on the third lap, at just over the half-way mark the leader of the race (Chris Eatough, Trek/Volkswagen) passed us. This guy finished the race in 7 hours, 9 minutes and the amazing part was he wasn’t even breathing hard when he flew by us. I heard him come up behind me and he politely asked if he could get by at some point. Well, in mountain bike racing if someone is fresh enough to pass you, typically you get over and let them by, it’s courtesy. So, I pulled off the trail a bit to give him some room and zoom, right on by. He said “thanks, have a good race” and was out of sight a couple minutes later. Stud. 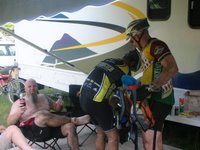 Finally, at 8 hours and 13 minutes I was able to start the fourth and final 25-mile lap. Randy said “well, the good news is we won’t be getting lapped any longer”. That was a good one, and a welcome burst of humor to the screaming of my legs. Considering the race had to be completed in under 12 hours, the final lap had to be started by 4:00 pm, so I was well under this requirement and felt a sense of relief knowing that I just had to keep on pedaling and I would make it. That sense of relief quickly went away when I realized that I had another 25 miles on top of the 75 I had already pedaled and it wasn’t going to get any easier. We stopped again to refuel and took about 15 minutes to stretch. Alicia had made it to the race by now and I was able to see her as I started my fourth and final lap, which was great.

Randy and I hopped back on the trail to finish the race. By this time I had figured out through some “personal testing” that drinking water out of my Camelbak was causing my legs to cramp severely, which made my third lap “oh-so-enjoyable”. When you spend this much time on a bike you really get the opportunity to learn a lot about your body, and I certainly learned some things this day. So, I had a small water bottle filled with energy drink that I sipped on until I arrived at the 12-mile aid station. They had a couple of different kinds of energy drink available so I drank several cupfuls and re-filled my water bottle, munched some bananas and then Randy and I took off for the final part of the course. 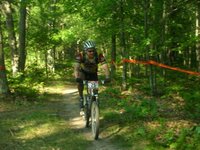 Realizing now what the water “overload” had done to my legs, there wasn’t much I could do to pick up the pace and knew that I held Randy back on the third lap due to my cramping. He was a true friend and despite being able to drop me at any time, stuck with me until about 10 miles from the finish. He was having a great day in the saddle and ended up catching two more guys in front of us finishing the race in 48th place. I ended up in 51st place and over a half-hour under the 12-hour limit. Alicia told me that when Randy finished the race, they all expected to see us together since we rode #2,. #3 and most of #4 together, so when I wasn’t there with him they all started to get concerned. But, I knew my body and what my legs were going through and knew that I wasn’t going to be able to keep up with him. As long as I finish under 12 hours, that was the most important part. 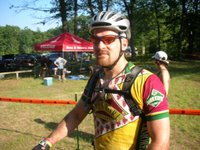 I’ve had several folks ask me (including my wife) if I will be doing this again next year. Right now my answer is YES. The support I received, both financially and emotionally, for this race and the CNCF was absolutely amazing. Those of you who donated, I cannot thank enough. You all were on my mind during the race, and when the cramps set in, or I started getting overheated, I thought about the trust you had placed in me to complete this race and that kept me motivated. I also had the thought of Neuroblastoma patients like Christi, innocent children afflicted with this terrible disease, that likely will never have the opportunity to try something like this to keep me going. My 11+ hours of pain pales in comparison to the daily battle they fight with this disease and being able to put over $11,000 into the fight is something that ALL of us have reason to be proud of.

In closing I want to again thank ALL of you who supported my ride. I especially want to thank my beautiful wife, Alicia, for her support and tolerating me spending more time this year on my bike training for the event. Team Active was a big help, both with my new bike (Cannondale Rush Team Replica, which performed flawlessly, by the way!) and for the gift cards to supporters of my event. Thanks also to Randy & Sally Vernon (and the rest of the “crew”) for their hospitality the night before and during the race. They also hauled my butt down to for a great training weekend and have been great friends during my years on the bike. It would have been MUCH harder without Randy there with me on the trail and the Fun Mover as “base camp”. And finally, I want to thank Monarch Community Bank (my employer), my fellow co-workers and the media (newspapers, magazines and radio) that picked up on my story and helped to get the word out. Because of your support, WE were able to get over $11,000 to the CNCF and get that much closer to a cure!

See ya on the trails…
The Biking Banker

Posted by The Binary Biker at 6:42 AM

I just wanted to send you my love and prayers because I know you(and Alicia!) lost someone special too! You are an amazing soul, thank you for running Christi's website and setting up the blog for her. You connected Princess Christi with the rest of the world and for that, I am forever grateful. The pictures of you carrying her little coffin to her final resting place brought tears to my eyes.

I dedicated my blog to Christi
I am a cancer survivor and she was an inspiration to me. I made up my mind to get up and go on with life. You will never know what her blog did for me. Love to all......

Eric - you are an absolute star! I am full of admiration, and look forward to reading the repeat blog for 2012.

Well done, and for SUCH a worthy cause.